After many years under the original name, American Bike Month, coined by the Cycle Trade Association, it was in 1956 that the name was changed to Bike Month. Now recognized as National Bike Month, The League of American Bicyclists see the month of May as a time to promote cycling and, “the perfect time for new or returning riders to get back on the saddle and ride their bike to work.” 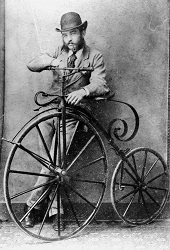 According to the Historical Locks article Locks for bicycles, “The earliest methods for locking velocipedes and bicycles were a padlock and a steel chain of a suitable length.” Not too much of a surprise considering the use of chains and padlocks to secure bikes is still common practice. Due to the ease of use with the chain fed through wheel spokes and the bicycle frame then around a fixed immobile structure with the ends of the chain secured by the padlock; this makes it difficult for the bicycle to roll away.

Early American and German bicycle locks also included wheel locks. These locks were designed specifically to secure a wheel between spokes using the bicycle frame, fork arms or pedal bar. Effective in their purpose, and integrated as a built-in feature on some bicycles in 1930’s Sweden, the drawback is they do not secure the entire bike.  Similar to the modern-day O-locks, the wheel may not roll, but the bicycle can be lifted up and moved. The most important part of bicycle security is the preventative measures that are taken to prevent theft. Of course this goes back to having the right lock for the job.

As mentioned, chains and padlocks are still a common bike security device. Cable locks are a lighter weight option for ease of transport and more flexibility when it comes to the length of the cable. There are also the U-Locks, or D-locks, named after their shape. Heavy duty chain, or cable, and D-lock combinations have also becoming more common; as well as multiple locks used for a single bike; such as a U-lock on the frame and a cable lock through the wheels and frame, both locks used to simultaneously secure  the bicycle to an immobile fixed point. Let us not forget about the Master Lock® Street Cuff®. With chain and cable options for bicycles and motorcycles they are just an interesting innovation in the way of lock security.

Ultimately, the decision is that of the bicycle owner on how they would like to secure their bike. Cost of a bicycle has nothing to do with the rider’s attachment to the bike, however, there are associated values of anti-theft guarantees that the bike lock manufactures will offer. Plus, the National Bike Registry provides methods for bike owners to help protect their bike in case of theft, yet again, prevention with security bike locks is better than the hassle of bike theft. The best advice would be education, because knowledge is power and your local bike shop or lock professional would most likely be happy to help advise on preventative measures to help secure and protect your bicycle.

Just because May is ending, with it National Bike Month, does not mean you should forget about your bicycle security. Stay tuned to The Lock People at MasterLocks.com for Bike Lock Month, June 2013.

What are you looking for?